As of late, the RoboRavens have been hard at work planning and manufacturing a portable testing board. The board is simple in design, but helps to serve a variety of uses, from uploading and testing code, practicing using machines around the class, to circumventing certain design challenges such as fitting it all in a 12”x16” briefcase.

Plenty of thought has gone into this project, which is an improvement on what we created last year. A fully-functioning FRC control system, including Power Distribution Panel, RoboRIO, router, voltage regulator and pneumatic modules. In additon, it was outfitted with motor controllers, a variety of sensors, and a power supply so it could be powered without carrying a full-sized battery. Before we began these projects 2 years ago, we re-purposed a frame from our first year and converted it into a practicing robot. This could be used by the drive team to experiment with controls, and offer the programming team the chance to work with a proper robot and physically manipulate the code. This resulted in more than several servos and motors that didn’t actuate anything. The benefits of these prototyping panels were that if someone such as the programming captain wanted to demonstrate that the robot needed to be improved by the build team, they could use the panels, in place of the actual robot. 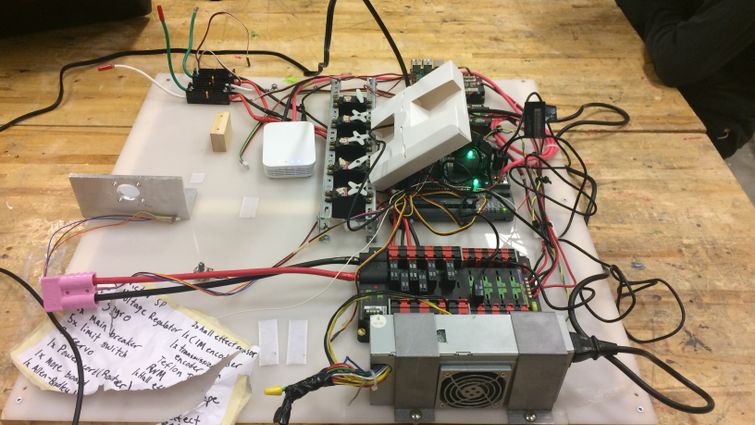 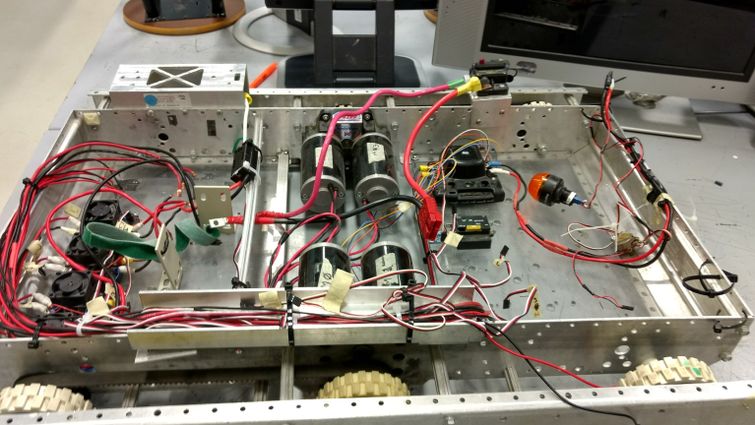 From top to bottom, our previous test board, and our practice bot.

With this board, however, problems quickly arose as transportation of a large piece of acrylic often became difficult, members would have to carry an exposed board covered in electronics through rain some days and had to balance the board amongst other bags and keys.

This new case consists of a lockable briefcase, a sheet of acrylic with support beams along either end, cut to the interior dimensions of the case. As the board maintains the need to have a power supply, it has a hole in one side of the acrylic for easy removal from the case. Components such as the voltage regulator module and the pneumatic control module were mounted to the board so any external features could be plugged in as needed. The team also decided to keep a power distribution panel so they could experiment with reading current draw from different ports.

Since we started, we have finalized the positioning and mounting of all the components, the fabrication of the panel itself, and began wiring (See top of the article).

An update will be posted soon when the “Proto-case” is finally wired and ready for testing.

Throwback to one year ago today, when we held our first ever robot reveal night!