There aren’t many changes with this year’s software, especially for installation. As always, the Linux instructions are a little vague, but we’ll do our best to post a Linux installation guide a few days after the game is released. The only thing to watch out for with installation is that if you’re using Linux, Ubuntu Xenial (16.04) or later is required, so make sure you update if you’ve been running Trusty (14.04).

The FX Shuffleboard is being introduced this year. It’s essentially a widget-based, upgraded version of SmartDashboard. The interface is a grid with automatically detected sources (typically sensors) on the sidebar. From the sidebar, the desired sources may be selected to be represented on the grid itself, wherein the windows can be moved around and resized trough drag-and-drop. 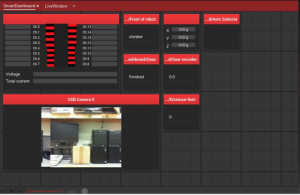 The existing drive classes (Arcade Drive, Tank Drive, etc.) are being replaced with Differential Drive, Mecanum Drive and Killough Drive. You can still use the old classes for the time being, but they’re now deprecated so you will need to switch over to one of the new drives in the near future, likely by 2019.

Mecanum Drive is, as you might expect, meant for mecanum drivetrains. It lets you drive using Cartesian coordinates (DriveCartesian) or with magnitude, angle, and rotation values (DrivePolar).

Killough Drive is an interesting one. A killough drivetrain is similar to a mecanum one except its wheels are not parallel to one another, and it’s usually three wheels (generally with 120 degrees between each). Killough Drive gives options for both the three- and four-wheel varieties of the Killough drivetrain. It works like Mecanum Drive, with the options of DriveCartesian and DrivePolar.

Take a minute to watch our virtual open house which goes over the FX Shuffleboard in more detail.

Throwback to one year ago today, when we held our first ever robot reveal night!